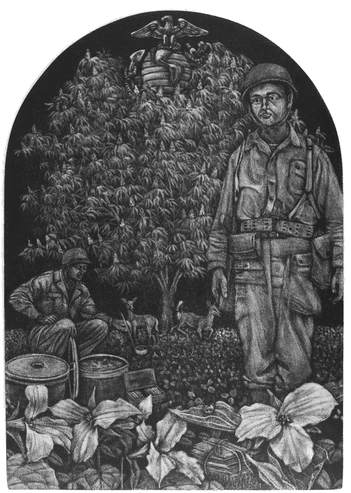 I was on the switch board. We had these switchboards every ten miles, they had to. I had it fixed up when that telegram came into headquarters I was to get a quick phone call. The next day I went up to the headquarters to pick up the telegram and while I was there the headquarters was calling back for me to come up because I had a telegram. The telegram said “you’re a father.” So I passed out the cigars I’d been collecting to some of the guys that I was in with. I think I sent one to the big cheese back in communication headquarters. And of course George got one, George Burns, not George Burns and Gracie, but George Burns the guy from Michigan, he was the cook.

The next day he was cooking the stew. All I know is the next time I seen him, he said he was smoking it and it came up missing and he could never find it. “I was making stew, and I was smoking the cigar while I was making stew” and he couldn’t find the cigar. He told me that the next time I seen him, after everybody’s eaten it. Nobody else knew about it.