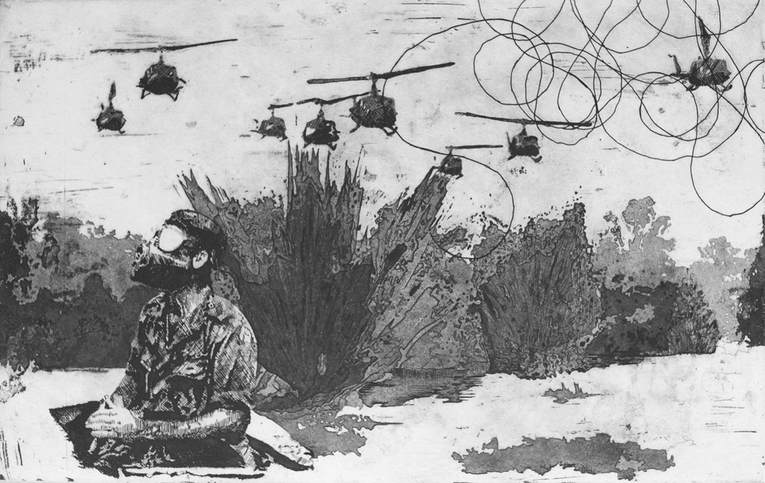 We had to build a base for the whole battalion, so for at least a thousand people. It was an ongoing process, and they were still building when I left, and unbeknownst to me at that time we were building the battalion overtop of tunnels —Viet Kong tunnels. Yeah we were having guys going out for guard duty at night and getting their throats cut because the guys would come up from their tunnels and slit someone’s throat and climb back down in the tunnel, and no one knew where they were at.

They would hide in the tunnels, and they had trap doors leading off them. They had rooms as big as our cafeteria so they could hide a whole company of soldiers underground. It’s a swamp, it’s not like you can dig anything hard out of the ground because if you dig more than a couple of feet in Vietnam you’re going to hit water.

I was assigned to an engineering company. I went as a truck driver and when I hit a land line and blew my truck up I volunteered to work in demolitions. I had never worked in demolitions before. Well that and I didn’t want to spend time on base because of some problems I had, so that’s how I got to be in the tunnels. I got to be in the tunnels to actually blow them up.
​
I was amazed, I mean you figure you go from here to the next building away, like I said the longest one was about 200 yards. The way I used to set my charges is I would go through and then I would time myself from the back coming out, and then I would cut timed fuse at different lengths to cover the time from the back to the front, and I would set them all going in and light them all going out. I was out by the time they went off and one time, one time I had to go back and they were gone, the charges were gone. So I settled for throwing a hand grenade as far back as I could get it.