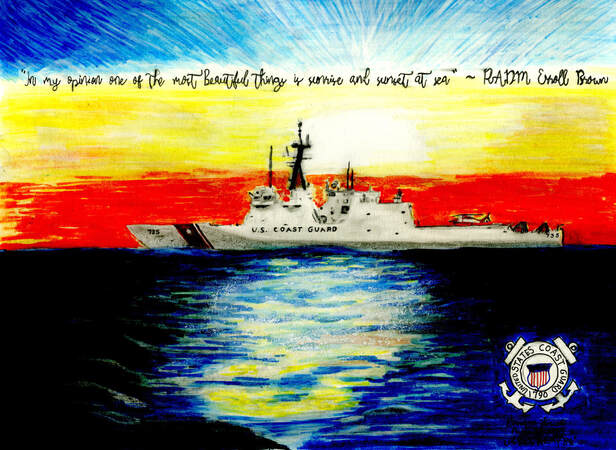 We were the platform responsible for the entire government’s response to the Valdez Oil Spill in Alaska. We were the major presence until some Navy assets deployed there. When we first got there we launched our helicopter and I had an opportunity to go up and see. In Prince William Sound’s pristine water there was this black dye, a dark, dark pool around the Exxon Valdez. Every time we went up to take a look the dye became larger and larger and larger. I call it the black year, it was just heartbreaking. The oil covered about 300 miles of coastline. When you get up in a helicopter and compare 300 miles [of the spill] to a 300-foot ship, the ships were just dots. We were thinking we had to corral and contain and put booms around this spill. The enormity and magnitude of the task can be unimaginable compared to the minimal size of the assets deployed to combat it.

Every boat that came into the area we had to cordon off an area to keep people and things out to not be drenched in the oil. We had to be very careful in our operations. You can take sea water and distill it, but we had to make sure that oil wasn’t in our systems operating in those waters. You’d have to close off your sea intakes, and they were using steaming hot water just to try to get it to be more liquefied, so it would be able to be picked up by some of the pumps and skimmers being used.

Exxon Valdez turned out to be one of those events that by the time of our arrival we were not clear of the magnitude of it. But as it began to envelop the entire area and make national news, it soon became the spill of the century. That incident enhanced the pollution response for the maritime industry in the United States, and initiated a whole new series of laws.