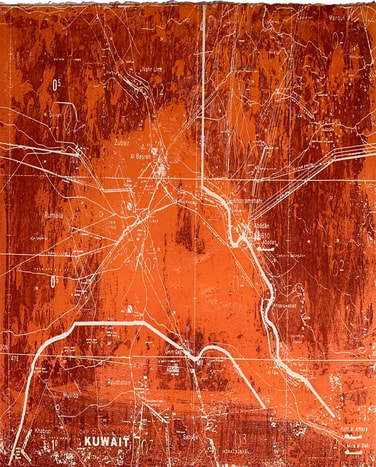 I became a Sergeant during the Gulf War, and then it was other people I had to be concerned about. We got alerted, but I was in denial. "Oh, we're not going to go anywhere. You know Saddam Hussein is just going to go away." But it went on for weeks and weeks, preparing and remaining on alert. I remember one call came in and it just felt like the "Final Call.” Okay, now we're really heading out. One of the guys I was supervising didn't show up, and I had to go out to his house and his wife answered the door and they were both fearful. I was fearful, too, but I just had to swallow that down and realize that this is what it is. This is how NCO's help you out, and this is what I'm supposed to do. From then on it was kind of a turning point for me, because I began to feel like "I like this" you know? A sort of  "I want to make a career out of this” feeling. You have to learn to swallow your fear, even though I remained in denial. That was one of my most memorable moments, and not everything is a happy memory, but helping that soldier face his fear is one thing that always sticks out to me. That was what kind of changed me from ‘Private Benjamin’ to an NCO and leader.

I had a squad at the field hospital in Desert Storm, about eight to ten people. Some of them knew me; some of them didn't. You have to earn that respect. When you're just becoming a new leader, people want to challenge you. You grow up very fast.

And to this day it is still a man's Army. Even when I progressed through the ranks and became a Sergeant Major - the highest enlisted rank - you still felt the differences between men and women. You always felt you had to test yourself better than a man. Physical training was one way that I always proved myself. Not that I wanted to be equal, and I'm not saying I wanted to be a Navy SEAL. That's something that never appealed to me. But it got rid of some of those people with the idea that "women shouldn't be in the service," or "women aren't as good as men." I was always dealing with that constantly - you know, like the old days when guys would call women "Sweetie" and "Honey." Sometimes you had to have a thick skin, and sometimes you had to put them in their place.

In Desert Storm I remember the smell of oil burning and smoke. Plumes of it daily... You’d blow your nose and it was black from all the oil burning. That's the way I remember it. Really hot. Never a break from the air or from the heat. Sweaty. Sticky sand. Those are things I recall - short, descriptive words, but that's what it was like. There are also some things that kind of trigger me that I don't like. Rubber – I can't stand the smell of rubber anymore from having to wear my protective gas mask all the time. We were constantly on alert for the gas, so your mask went with you everywhere. And I can drink water warm now. It doesn't bother me anymore.