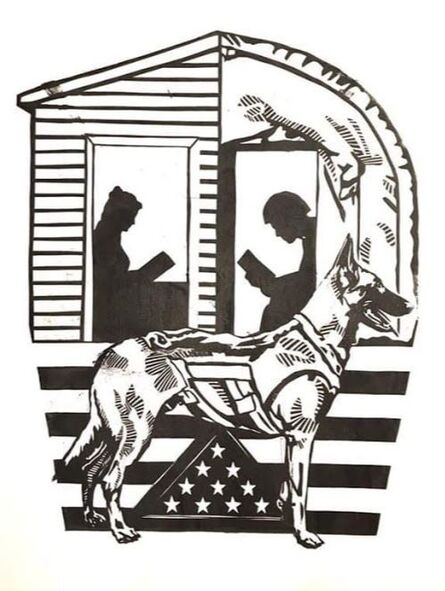 ”Kitti”, 24" x 18", Silkscreen, 2019
Christopher, Air Force, 2006-1016 & Shana (Wife)
​
Shana
We had a daughter. She was almost a year old when we finally made the decision. It was after Katrina, and we were just kind of just in a spot, and we knew we needed something to be better for her. We were thinking healthcare, and just being more stable with our employment and jobs and everything.

We always knew that him being away was going to be a big part, we just never realized how much he was actually going to be away. If it wasn't for my friends that I made in the military, life would have been a lot more difficult for me when he was deployed or away.

It's one of those things you definitely have to make friends fast. You definitely can't be an introvert, or you're going to have a really difficult time just because you kind of have to lean on other people to just get through it. It's just nice knowing that you have people going through the same experiences that you are. They almost become more of a family than your blood family, because they're so far away you have to make those bonds with other people.

I would give Chris a journal for him to write down what he went through over there, his experiences and everything just so when the girls get older, they'll have a little more in-depth of what his job was actually about, what he actually did, why he left so much.

Chris
I was in the military police for five years, and then went to K9 unit. I worked with Kitti, a female Belgian Malinois, in Afghanistan. She and I would walk in the front of patrols to sniff out bombs and people. She was super friendly, almost too much for a working dog. By the end of our time together she was getting PTSD, would shiver, sometimes defecate or puke when bullets or bombs were happening around us. I tried to show officers at home by recreating sounds and it didn’t work, she would just wag her tail. Dogs are more sensitive than we realize or give them credit for, they pick up on our fears and emotions. When she retired at 12 years old our family adopted her, she lived to 14 years old.