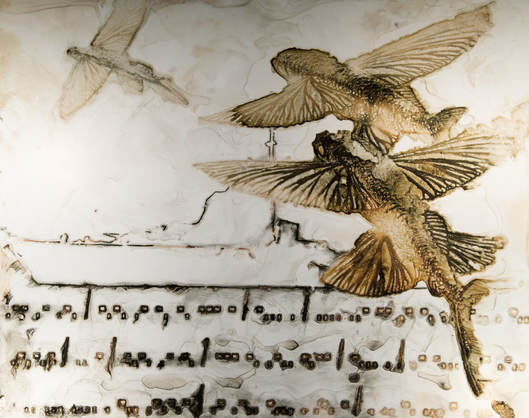 “40 Words per Minute”, 16” x 20”, Archival pigment print – Cliché-verre, 2018
Raymond, Navy, 1948-1952
​
There were three of us radiomen aboard the ship, each serving eight hours a day.  And the two of us who weren’t on duty would sit in there and talk, just because that was our place.  Nobody else was there, it was just us. Some of the guys who just had general deck duty, they would be down usually in one of the sleeping areas playing cards, poker or whatever, on the deck.  There would be a whole big ring of them sitting there playing cards. Or if it was really nice we would sit out on deck sometimes because this was March. When it was calm it was quite nice. Maybe in the 60’s.  I had never experienced things like flying fish before and we would go through a wave like this and maybe a dozen flying fish would come over and land on the deck. They couldn’t make it off the far end. So that was interesting, picking them up and seeing what a flying fish looked like and then throwing them back over the side.  I think we spent our time shooting the breeze, as we called it, with friends in the radio shack. That’s what we did mostly.