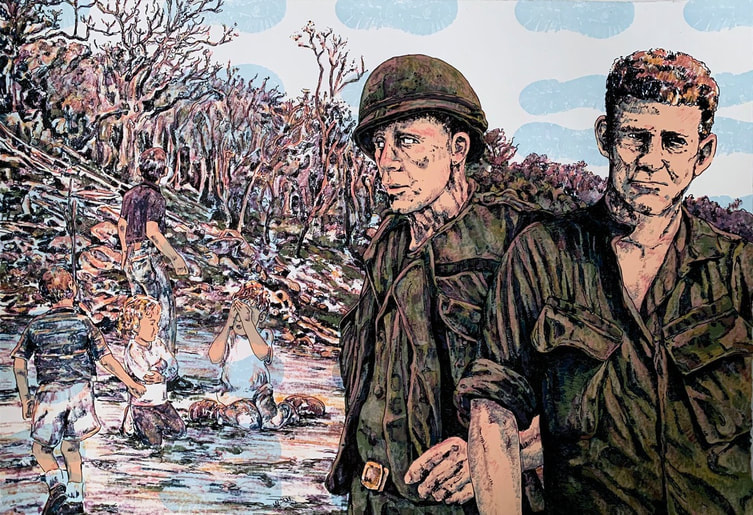 Well they sent me from Cam Rahn Bay; they sent me to Chu Lai.  Chu Lai had a place called a combat center.  It was one additional week of training before you were actually assigned to a unit.  And, this one week of training included some weapons training and some land navigation and stuff like that.  And at the end of this training there was a for real ammunition, live ammunition ambush patrol.  Um…I initially had orders that I was supposed to go to the 196th Light Infantry Brigade, which was another part of the Americal Division.  Americal Division had three infantry brigades…the 11th, the 198th and the 196th.  Um…the 196th is an ass kicking outfit.  I had never heard of the 11th.  But at the last minute they changed my orders and they sent me to the 11th.  And they took us up to over the ocean…I think it was what they use to call a Caribou, which is an airplane and it landed in Duc Pho.  And that’s where the company was based.  Duc Pho.  And as I say I was Company B 3rd Battalion 1st Infantry.  11th Infantry Brigade.  And I got there and there was a guy in the supply room and his name was Stone.  And he had a big scar on his cheek, nasty looking scar on his cheek and…he handed me my rifle and the rest of my uniform stuff.  And he give me my pair of boots and at this point I only had one pair of boots and he said “The army only issues you one pair of boots, but you actually have to pay for the second pair of boots.”  Well I was just a little too wise to fall for that one and I said well, With all due respect sergeant if I have to pay for the second pair of boots, well I’m just going to pass and you can just keep those.  And he said, “Oh I’m just kidding you.”  And he gave me the boots.  But I have no idea; he may have actually gotten some money out of other people.  I was a little too wise for that.  They sent me out to LZ Liz, which was a couple of miles from, to the north of Duc Pho.  And the next day there was a CA.  A CA is a combat assault, it’s a helicopter ride.  And um…I have to tell you that my life…there was before that day and there was after that day.  That day out on the beach there I am.  And I don’t know what the hell I’m doing.  These guys here, they’ve got those deep sun tans.  Their boots look like they came off the devil himself.  Um…and they were tough beyond anything you can imagine.  They were just like a whole different thing.  We landed there and we were making our way through there and there was a big whooshing sound and it looked like fireworks up in the trees.  And I was some distance away.  And they guys started yelling.  They started screaming.  And um…I didn’t know any of those people’s names you know…there I am in my new uniform and there they are in there beat-all-to-hell sun bleached uniforms.  And..there was a guy staggering around in a circle.  And his name was, I found out at the reunion…at the time I had no idea what his name was.  His name was Bobby Clanfier.  And, he had triggered a white phosphorous artillery shell that had been a booby trap.  And it burned him, it burned him bad.  It was like the back of his neck was like sizzling.  It looked like it was boiling.  And he was staggering around in a circle and he kept screaming.  Unearthly scream.  And he kept screaming “God dam you Charlie I’m going to get you for this!”  But he never got anybody because in a few minutes he was dead.  And there was a guy by the name of…also down there…his name was Brad Newell.  I found this out at the reunion too, because as I say the day I had no idea what anyone’s name was.  No one wore name tags.  And a wp burned a hole in the side of his head the size of a golf ball.  And every year at the reunion I tell him he cheated death that day.  And it was a hell of an introduction to the infantry.  And I kept telling myself...you are in hell.  And as I say…there was my life before that and there was my life after that.  Um…it remains the most awful thing I have ever seen.