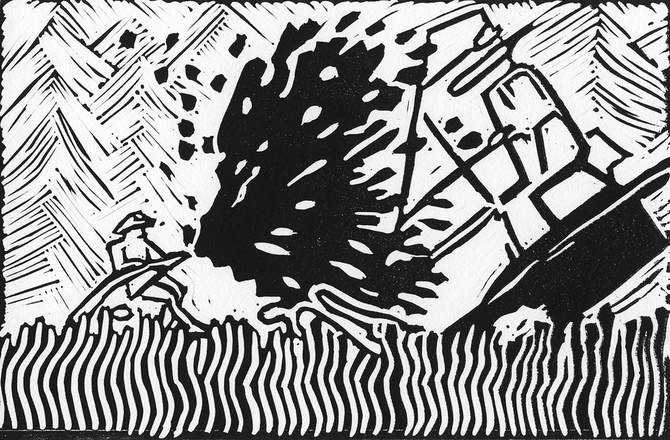 We got a call from the control tower saying that an American plane from the nearby base had gone down not too far from us. We got out to the crash site, and the only thing you could see was the tail section, it actually went straight into the ground like a log.

The F-111 crew had bailed out in the ejection module before impact. They don't bail out like you normally see in other military planes, where the individual aircrew members are hanging from a parachute, they instead ride the cockpit module all the way back to the ground under it’s own parachutes.

We approached the crash site in pitch darkness through a wooded area with hardly any light at all. We had our individual spotlights but they don’t give you the illumination that the portable light carts used on the flight line do, so that made the retrieval operation kind of difficult. There were tree limbs scattered all over the ground, and at first you couldn't even tell which direction the downed aircraft was facing, because of how much fire suppressing foam was put on it, covering everything. Once we got the foam washed off you could read the letters on it and say “oh okay, now it’s pointed this way.”

We figured the wings were buried as we couldn't see any remnants of them. We never did see any other remains of any other part of the aircraft except for the module and the tail section.