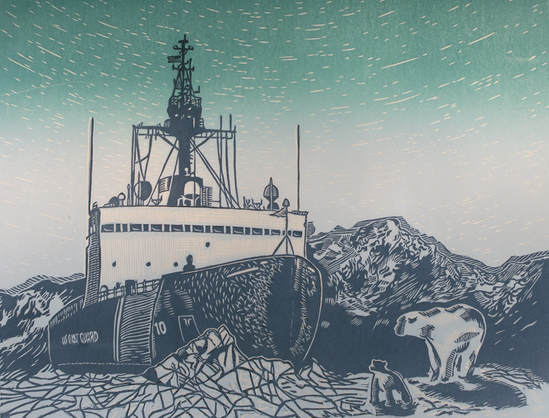 ​My first assignment was aboard a Coast Guard Ice Breaker, and I spent a couple of years on board, both in the ice and in the open ocean, between the Arctic and the Antarctic. We made two or three trips to the Arctic and three trips to the Antarctic in those two years.​
​
It was very, very desolate up there. Just a lot of ice, not much to see, you can't really get close enough to the land to be able to see much because it's very shallow. We had three Coast Guard ships, ours and two smaller ones - and we spent a fair amount of time keeping the other two out of trouble because the ice would get so thick, they would get stuck, and we'd have to go break them out, that sort of thing.

Our ship was big, it was broad-beamed, but it had very little free-board, meaning there's not a lot of it above the water line. It was close to the water and close to the ice on the sides. Sometimes we would see polar bears looking along besides the ship, following us, and it would've been very easy for one of them to have just jumped up on the side of the ship. Fortunately, it never happened.