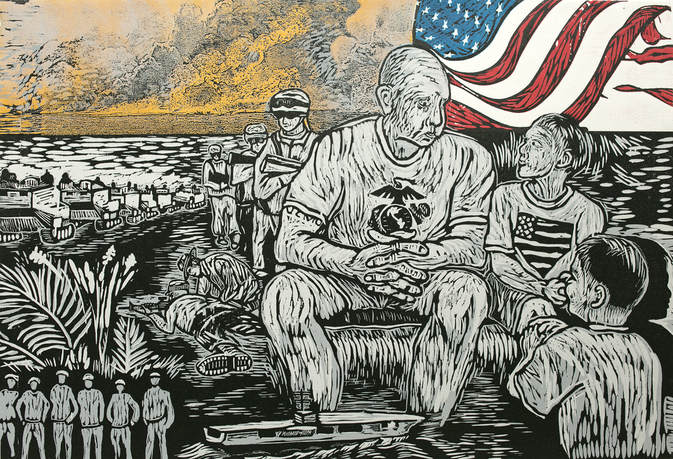 "EVAC: Looking Back, Looking Forward", 18" x 24", Relief
​Dan, Marine, 1980's/90's Peace time
​
I was over in Panama and had a platoon - an infantry platoon - and we were tasked with being the opposing force for against one of the battalions out of the 101st Airborne Infantry Unit from the US Army. They were down there doing counterinsurgency training. My platoon of 32 Marines were supposed to pretend like we were guerrilla infiltrators who had come on and blown up a bunch of stuff, and then we'd run back through the jungle, and they were supposed to try and find us. They had helicopters and were totally supported, along with boat support; I had 32 people and they had close to 1500.

I took my squads and I said to each one of the squad leaders,"Here's where we're at, here's where we need to be. You guys go up in your small group, there, and you try to get there without getting detected." And, I'll be damned, four days later we all got together at the same place. Nobody got seen or anything. We were supposed to get in these rubber boats they had hidden for us, row across the river and then occupy an urban fortification. The next day the army was supposed to come in and kill us. It was still daylight and I wanted to do a night crossing so we wouldn't stick out as bad.

We waited there a couple of hours. It got to be twilight, so myself and about two or three other Marines started walking up to the fortification, just to be scout and secure everything, then everybody else would come up. Well, as I got up there, just as I unhooked this flash bang, coming down this trail comes this army soldier. I have no idea where he was from, but you could tell he was tired, he was worn out, and he wasn't necessarily alert or anything. He was walking by himself and he walks up to within a foot of me. By this time I had already scrunched down, halfway in the bush. Of course I’ve got camouflage paint all over me. There are two Marines behind me - a couple feet behind me – and they scrunched down, too. It's twilight, so it's not real bright, and we're in the jungle. He looks around, drops his weapon, drops his goose gear, drops his trousers, and starts going to the bathroom right there in front of me. As I'm sitting there, all of a sudden I hear this helicopter coming in and it's like it's landing right on top of us, 'cause all this rotor blast just starts blowing everything away. And I'm sitting there thinking, "Aw, hell. This helicopter's going to get us." And just as I had thought that, it took back off again. Of course there's dust and everything and that army soldier looked me right dead in the eye and that's when I jumped on him and captured him and said, "You're mine. I captured you." He started screaming, so we dragged him back with his trousers still down around his ankles.

I told him, "I don't think you understand, we're not the enemy. We're Marines and we're going to eat you if you don't start talking." The kid spilled his guts. "Oh, I'm with this unit and we're here and there's a LPOP (Listening Post) sitting up there, and there's about twenty people."

We moved on up. I got about fifteen of my Marines to sneak up, kind of get around, and there's twenty soldiers there. They're all laid out, exhausted. There was one guy on the radio, writing some stuff down, and I stood up and said, "Fire!" And we all walked to them, firing our blanks at them and killing them, and some of the soldiers just looked at us like, "What the hell?" So, we killed, you know, pretend.

I got on the radio, used their call signs, called in artillery strikes on three of their main units, and killed them all. I called in an airstrike on another one and they finally figured out, "hey, our net's been compromised. Switch to the alternative." Well, I had the alternative frequency, too, so I switched over to that. I continued giving out all kinds of orders. Finally, they sent their reserved platoon, or reserved company, which is about two- to three-hundred people, on two of these LCU (Landing Craft Utility) boats right up the river. So, I got all my Marines - all 32 of them - and we lined up on this river bank, kind of up from the water, a little bit in the jungle. And these boats were beautiful. They came up and it was twilight so you could see them perfectly silhouetted, and they were loud. Both came in side by side, lowered their ramps, and you see all these guys sitting there. And they lowered their ramp about 200 yards out in the water and when they did that, I turned to my referee and said, "Well, I want to light them up." And so I said, "Fire for Effect!" And 32 M-16s and SAWs (M-249 Squad Automatic Weapon) just opened up on them, and I heard that referee say "holy shit." And we killed all those guys too, right? Finally the Army decided to kill us by calling in an artillery strike on our location, and I said, "Alright, we're dead."

Well, we get back, and we're there at the Panama Base on the Atlantic side. As we get back to the Mess Hall at Fort Sherman it's about lunchtime, so I get my Marines in and get them all fed. I'm in the chow line, the last guy in the chow line, and I’ve got this jungle filth all over me and my Marines say “Hey Sergeant West, all these Army guys are here and they're all clean." This Army Lieutenant comes up to me and says, "Are you Sergeant West?" I said, "Yeah, I am." He said, "Well, our Colonel wants to see you."  I hadn't eaten anything and replied, "I’m not going to go report to some damn Army Colonel. I'm not in his chain of command and I'm starving."

So the lieutenant waited until I ate, then went over and told the Colonel what I’d told him, I could just see him laughing and he said, "Yeah, just wait." After I ate I went over to the Army Full Bird and said, "Colonel, I understand you want to see me." He said, "You're an insubordinate son of a bitch, aren't you?" And I replied, "Well, I killed all of your troops last night, Sir, so how insubordinate do you want me to be?"

There's several things I learned from my time in the Corps. First one is that teamwork works, as long as everybody's committed to doing what they're doing. I would say that my service gave me a lot of valuable life lessons I needed to learn and, fortunately, I learned them without getting killed. But, I think the main thing the service taught me that I still use to this day and that I impart to my own kids and anybody that'll listen is, do your research and plan if you want to do something, don't just say, "Hell, I'm gonna climb Mount Everest." Everybody says that, but doing it is different. You gotta go climb smaller mountains first, you gotta get your equipment together, you gotta know what you're doing, you gotta talk to people who have done it before. You know, I call it the seven P's - Prior Proper Planning Prevents Pitifully Piss Poor Performance. But, that's kind of the main thing, and I have stories to tell my kids and my grandkids, you know? There are some stories I'll never tell them, just 'cause there's only three people that need to know about them - and that's the enemy, me, and my God.