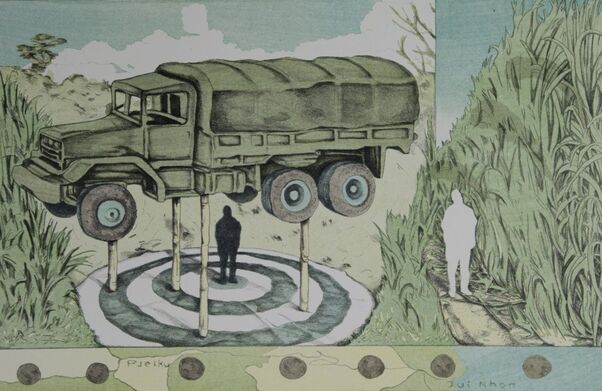 We were over near a place called Bong Son.  I was in a convoy, driving the deuce and a half.  We came to an intersection in the road where it made a “t”, but there was a big tractor-trailer truck there too.  For some reason this intersection had curves and it was just a mud road.  Every time this guy would try to turn, he would catch the trailer on the brim of the curve.  So he had to really work to get the trailer around the corner.  But I had to park back about fifty yards to wait for him to get around that corner.  He just had the intersection blocked.  I was sitting there and I looked over to my left and I see three little huts back off the road.  I was looking at the windows and doors to see if anyone was in there or if there was anything dangerous.  I don’t see a soul.  I look over again and I see this little girl coming about halfway from the huts.  She was probably only five or six years old, walking out with her hands in front of her, just looking at me.  Before this I had conditioned myself to not pay any attention to these people too much, that way if I see a dead body it won’t be human, it won’t be real.  Trying to protect myself.  Then this little girl comes out there…not going to pay any attention to her, not even going to look at her.  I just started watching the truck again.  Pretty soon she was out of sight because of the ditch that was there and the door frame was pretty high.  Curiosity gets the best of me and I just look over and she was coming across the ditch.  She doesn’t have anything big enough in her hands to cause me any trouble.  The gas tank was on the other side of the truck, she wasn’t dropping a hand grenade in there or anything.  I feel this little vibration and I realize she is climbing up on my running boards.  I’m thinking, okay, just grab the door handle when she gets up there and pop the door open to push her down into the ditch again.  Nah…I couldn’t do that.  But what is she doing there?  What does she want?  So I look over again just in time to see this tiny little hand with a little wild flower come over my door frame.  I looked at that flower, leaned over a little bit more and looked a right down at her smiling little face.  And there goes my theory…she is human.  She is real.  She is a person.  Just like everybody else.  I stood there with that flower in my hand and looked at her.  She climbed down off that running board, went back about ten feet in the yard and put her hands behind her back and just sort of swayed back and forth smiling.  I’m done.  I can’t put her out of my mind.  So I put the little flower on my seat, jumped up and got my c-rations that I had been saving.  I had some cake and fruit cocktail that I had been saving.  Well, I didn’t have it…I gave it to her.  When I threw the cans out, she stepped back like I was throwing rocks at her.  She didn’t even know what they were.  I kind of made the motion like I was eating something and she made a little basket with her skirt and put the cans in it and headed back towards the huts.  About halfway back she turned around and gave me a little wave.  The truck finally got around that corner, so there I went and I never saw that little girl again.  I often wonder what ever became of her.  I close my eyes and I can still see that little smile.