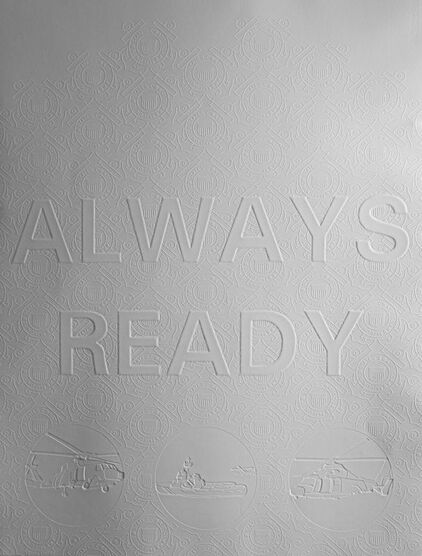 "Always Ready", 28.5" x 21", Embossed Print, 2018
Rick, Coast Guard, 1983-2016
​
I was a helicopter pilot for the majority of my career, and most of the time was spent doing search and rescue and standing alert duty. You get the call, the alarm goes off, you scramble to the helicopter, and you go.  For me, that was one of the real reasons I joined the Coast Guard. That mission, and that service before self, really resonated with me and I got to do a lot of that throughout my career.

Typically the helicopter crew has four people. It’s a pilot and co-pilot up front, a flight mechanic in the back who operates the rescue hoist, so they’ll lower a basket or litter or, in this case, a rescue swimmer. The four of us went out, we got on scene, there was pretty nasty weather but we were able to scoot around the backside of the hurricane. There were about sixty mile an hour winds, and about thirty-foot seas. We picked our way through the really nasty weather and were able to find the life-raft that these five people were in. What I remember most about that case was the water, the waves basically filling the windshield of the helicopter. We had to be low enough to lower the rescue swimmer and then low enough to lower a basket and pick up each of the survivors from the life-raft, but at the same time these thirty-foot waves were crashing. Basically, my co-pilot was watching the waves and he would call, “up, up, up” and we’d pull power and we’d climb up and the wave would go underneath the helicopter, and then we’d lower ourselves back down to get low enough to pick people up.