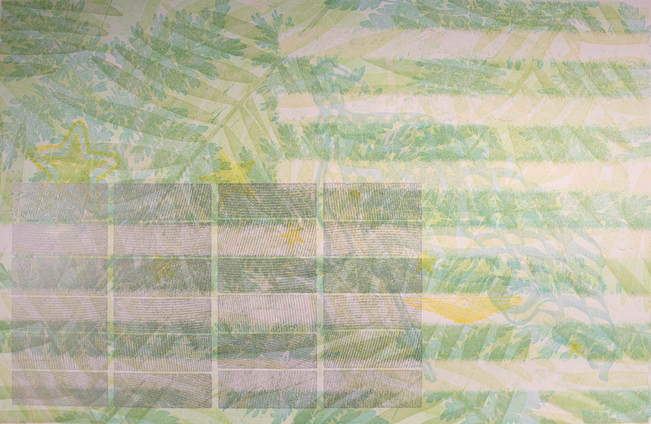 "Decorum and Valor", ​11 1/2" x 17 1/4", Letterpress
​Thomas, Marine, Vietnam
​
They had what they called “dusters,” actually antiaircraft guns, chassis-mounted, cute little things. The NVA and the VC absolutely hated ‘em. I hated ‘em ‘cause they were just horrible. Why would you use antiaircraft guns on human beings? Well they did and they worked like a million bucks. The dusters started up and we’re thinking “Oh this is a holy fuck moment, the dusters are starting.” That meant they could literally see ‘em eyeball to eyeball. These people were just being chopped up, ‘cause you could see the rounds firing downhill off the fire base across the valley at these guys.

We were shot at, “Pop Pop” you know, slow and accurate and even, and the training worked. Slow, accurate, pick your target, hit it, then go to the next one. I’d just finished engaging a couple of fellows who were laying in a sort of row on the ground, and that’s when I got shot. I got shot through my lower right leg. Got clipped by two more, and of course the bummer is that then they hit the armor so it bounced right back. About the same time an RPG went underneath the track into the side of the duster and it blew out. And then another one went in under, thank God for me I guess. I went under the track further towards the front. The thing just rolled to a stop. I’d been shot though, you know. I’m trying to hold on, to keep from falling off.

The other two guys had been shot as well, and one guy over here he ain’t there anymore, I don’t know where he went. I never saw him again. I pushed myself off and landed on my face and the other two guys had just rolled off  or fallen off - whatever - they were on the ground. One had crawled around to the front and tried to crawl underneath the track. The other one was just laying there. I don’t even know what their names were, just the other two new guys.

I just knew I had to get away from the armor so I started pulling myself on my elbows and my hands, and the duster, well, the duster was stopped. The driver was gone, just gone, but the gun crew slewed the thing around and lit ‘em up. Only six to eight feet in the air he started to light ‘em up. I needed to get off the road, “this ain’t gonna last, this ain’t gonna last,” so I just started. They gave one hundred round cardboard boxes of gun ammunition for the squad’s machine gun to the new guys to get to hump. They either got to hump a can of ammo or three antitank rockets or mortar rounds if they attached mortars. The new guys always got to hump the heavy shit, and we were all new guys. I lucked out, I had anti-tanks. I had those strung over me with all this other crap and I got my grenade pouch hangin’ off my flak jacket. I can’t move. Everything stopped working. The only weapon I had left was my knife. I just remember pulling it off my side and running it upside my flak jacket, cutting the stuff loose, and by then I could pull myself around. So I had my flak jacket on, but I didn’t have all this other crap dragging on the ground beside me and went for the ditch.

I remember getting in the ditch and I flopped myself over as a third RPG hit the duster, just below the left gun right about where Mr. Bugeye was sitting. He just started screaming like a madman. Another RPG came in and skidded off  the face plate, I think it went in front of the turret. The turret was cocked around sideways. “Wham-o!” and he just disappeared -  he just disappeared. We were there about another three hours after that. I pulled off my belt and put it above my the wound on my upper right leg and just yanked it tight and thought “fuck. Now what?” I know my squad had a grenadier attached, I can’t remember his name, Loag maybe, or Black Loag or Black. He saved my ass and the other two guys. They lived as well.