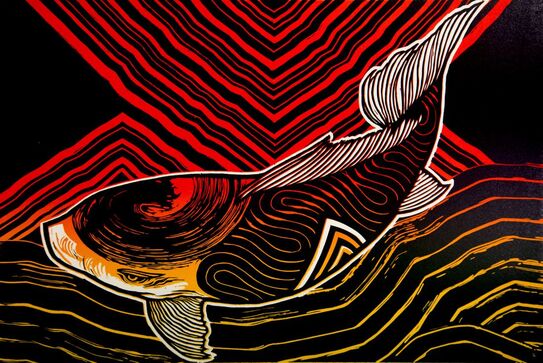 "Never an Easy Leap", 15" x 22", Relief, 2018
​Justin, Marine, Iraq /Afghanistan
​
I remember one day, dealing with a different Staff Sergeant, seems like I had problems with all of them, but him and I ended up becoming very close later on in my enlistment in Japan. But there was one day that I was crew chief, I was the driverin charge of my crew and we were sitting in the hotspot, we had emergencies all day and we didn’t make our racks, our beds. So I’m like, okay, we’ve literally had emergencies all day, we had to skip chow, we didn’t get to eat during lunch time and it was, I don’t know, it was dark, so maybe seven or eight at night, it might have been later, but he wanted us to rotate in and out, taking our mattresses from where
they’re supposed to be to the truck deck, which is constantly covered in motor oil,all kinds of chemicals. I mean we had MSDS and a locker, all this stuff is down there, beds shouldn’t be down there right? I knew better, I knew that it was wrong, so I did it one time and I made my rack and stuff and he said alright we’ll rotate it out.

So we took everything back upstairs, took all the linen and stuff off the mattresses and then we went back out. Then the other group went and we came back in, I went up to my Sergeant and said my crew is not doing it again, and he’s like what are you talking about, and I was like, well Sergeant I understand that you outrank me and I mean no disrespect, by any means, because I know this isn’t coming from you, but I will not order them at all, in fact I’m ordering them not to do that again. I said I’m willing to lose rank over this if it comes down to it, but I’m not going to do this because it’s not safe and I would consider this to be hazing. And he’s like, are you sure you want to do this, and I had already made up my mind, willing to accept the consequences. So he went up and told the Staff Sergeant what I said and he came back and something must have made sense because we didn’t have to do it again.

​There were nights where the entire section, because somebody was mad, we were just messed with all night. But I think that was a kind of turning point for that Staff Sergeant because he got treated kind of differently, he got screwed over basically in the same fashion that I had been. So we ended up having a heart to heart at one point in time and he finally ended up telling me, he was like, “I absolutely hated you when I came here. I was a Sergeant, I was told everything bad about you, the MASS (Marine Air Support Squadron) Sergeant didn’t like you,” and he told me that my command hated me, and he was like, “but I respect you.” That meant a lot to me because I basically changed his heart and mind about me, once he got to see who the real Justin was, or who the real Corporal Anthony was, in a sense like I just have pride and I care about the people around me so, yeah, I will buck the system if it is the benefit of those around me. And he respected me for that. My last year, in a sense was actually pretty good, but I had to take two years of fighting tooth and nail basically, with command, until I felt that I wore them out; little did they know that I was worn out too.