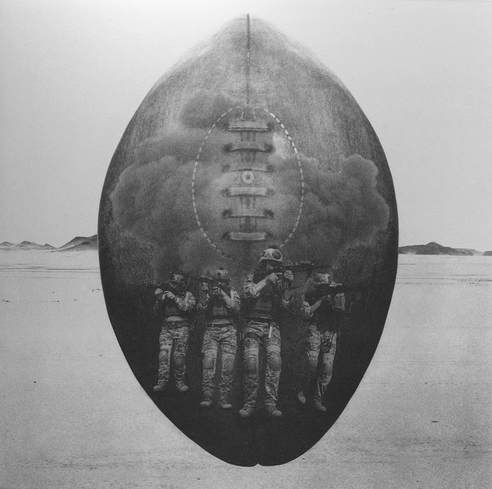 We took a team and we snuck across the border and got within a reasonable distance. He had this, I don’t even know what it was, it looked like something out of a Star Wars movie, he sets this thing up. I’m looking with my night vision goggles and as I’m looking at a little building over there you could see the guns sticking up. And then I see this red bright light and I’m thinking “what is that?” and it’s a guy smoking a cigarette.

We get on the radio and say the target’s painted and a couple of Apaches come in, we didn’t even hear them until “Boom! Boom!” And then everything explodes, and then you start seeing the secondary explosions from the ammo on this thing.

We sat there, sat still, and then we went to go do a BDA, Battle Damage Assessment. It was starting to get daylight and the Iraqi flag was still flying. Everybody was dead, there was a dog that was dead. Whatever this missile was that they fired killed everything. The people inside the tank were just dust.

I took the flag, rolled it up and shoved it in my shirt. I remember the guy smoking the cigarette, and he was in there. The cigarettes were called Summer Eves. I took the cigarette pack out of his pocket. I was looking death in the face for the first time. It was crazy. These people didn’t just die, they died bad. It was horrible.