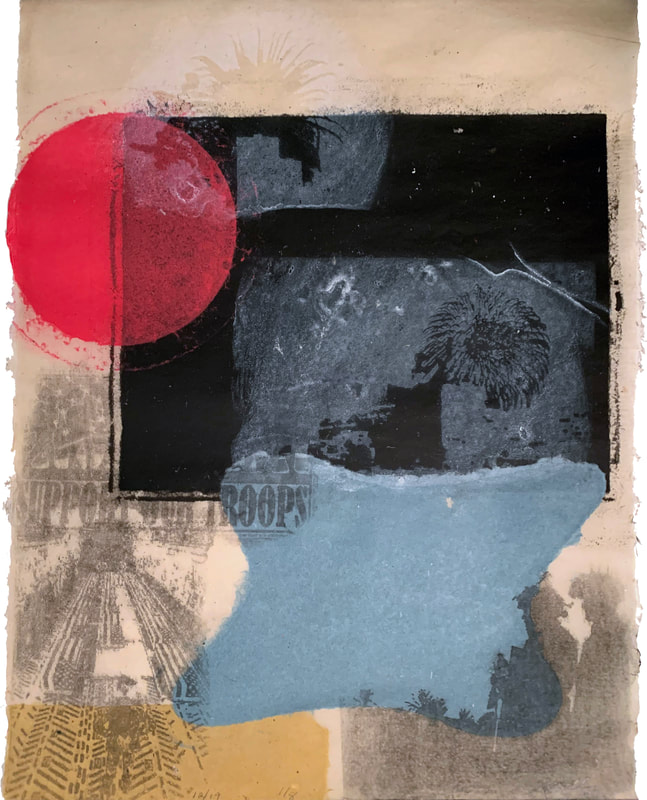 "What Mothers are Left With", 18" x 24", Pulp Painting with Abaca, cotton, flax & pigment
Minnie, Marine, 1973-2008
​​
I joined in February of 1974. I started out as communications, and back then it's when we had the monster computers, the teletype machines, or telegraphs and stuff like that. We had the yellow tape that ran through that teletype machine, so we were supposed to read the holes and all that before it was transcribed in the machine, because it would run through there and then we would get a sheet of paper of what it said. Lots of times we had to correct the translation. I can't remember what they're called, but we used to call them the monster dishes, because it had like five levels. It would actually gather the information on there, and then when we needed to print it out, we would take the big disk out of there, put it somewhere else, and then that's when it would start printing all the information that we needed.

I missed working and doing my job. I missed the camaraderie with my other friends that I had really built up a relationship with. So you know, like they say, once a Marine, always a Marine. It's not all about being gung-ho. People need to understand that we do care, some of us have a  bigger heart than others, but it's not always that strict shouting match that everybody thinks is like, "Oh yeah" No, it's not like that at all.