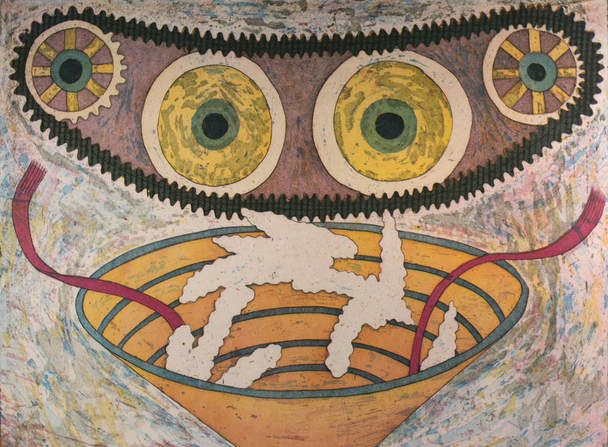 There was a truck in front of us that got hit and I heard a bunch of guys that were wounded. I stopped our tank and ran up to see if l could help and do anything. Nobody was firing, so I ran up there firing and I got hit. I started heading back to the tank - my tank. When I got to it, they had to help me up on it. I got up there and started getting out a .50 cal and then got hit in the other arm. I got hit within the first five minutes, in both arms, my right leg, and my stomach. I got a ricochet bullet in the stomach. Thank God it was a ricochet or I'd be dead. 'Cause it only went in about two and a half inches so it didn't penetrate the stomach itself.

There was a bunch of dead Vietnamese alongside the road from previous ambushes.I had one of the guys go over and take a sample - scoop up all the maggots he could find. He brought the maggots back and I put them on my arms and legs. And theystarted eating dead tissue, which stopped the bleeding.  That lasted until the evacuation helicopters came and got us - everybody that was wounded. They got put in the chopper and the medic looked at me and seen the maggots and thought I was already dead.

I looked up and said, "What the hell is wrong with you?" Scared the shit out of him.

The first guy at the hospital that I talked to, he says &quot;Who put them on you?" I said, "I had one of the guys do it." He says, "Smart move,” then says "We gotta start getting the rest of the guys doing this shit."

They took me into the triage. Put me to sleep. And that's the last thing I remember. I do remember, I woke up for a little bit. They were talking about my leg and taking it off. I said, "give me an M16." He says, "Why? You not going to shoot it in here." I said, "Well, if you try to take my leg off, I'm gonna start shooting." And they forgot the idea right there.

So, it's good to be an American Indian. You learn a lot.