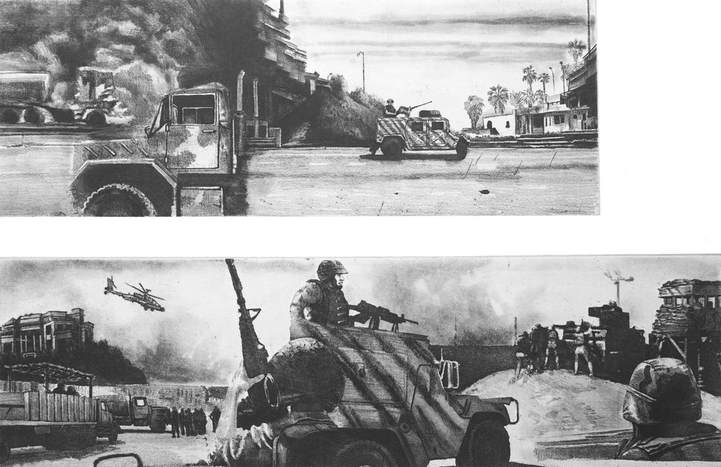 "The Battle of BIAP", 20" x 26", Intaglio
​James, Army, Iraq/Afghanistan
​
At that point they were starting to concentrate their fire on the wall, right where we were at, and they were hitting it with RPGs. You’d be sitting there and all of a sudden cinder blocks would fly everywhere. We’ve got small arms fire going out and small arms fire coming in, I’m on the radio trying to get some soldiers up here to defend this perimeter. And nobody was coming. People were taking cover because there was so much fire coming in. These guys had launched this Hellfire on this one area. So for the first five or ten minutes we’re the only ones there and we’re pushing them back. Once again we’re at the apex.

I have to hand it to them, they were pretty darned courageous. They would get up and move even though they knew we were going to cut them down every time they would move, and my guys were good at it. They went into a house, and there were probably 10 kids that came running out. I told my guys cease fire because we didn’t want to be shooting no kids. The insurgents were still firing over the kids’ heads. I remember seeing one little boy’s face and he was terrified. They did kill one kid.

I can see this terror on his face and I’m watching thinking, “find some cover! find some cover!” Well they did, there was a big mound of dirt, and these kids all huddled behind the dirt and they stayed there. These kids were smart. And of course we just unleashed all hell on those guys after that.