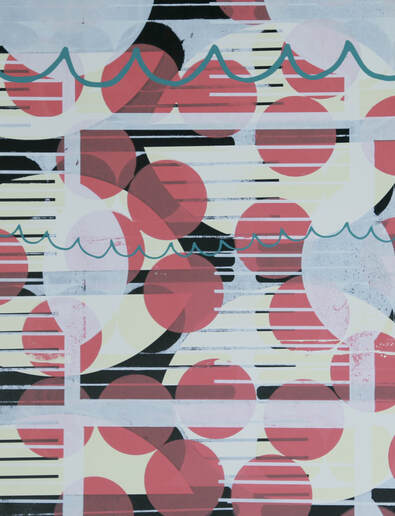 "The Boy from Niagara",  20" x 15", Relief/woodcut and silkscreen
Elton, Marine, World War I
​
​Up in the Army of Occupation near Brebach Germany we played quite a bit of poker. Especially after the paydays. We’d had a bunch of new men that had joined us through the course of the summer and had recently absorbed a bunch of men who had just come from Belgium. We called them the “Arlon Veterans.” They had never been under fire. But they were part of our fill up strength. We were playing cards and card players do not like kibitzers. And Dizzie Walters come into the room, he didn’t speak to anyone. He almost never did. He came to the card table. He just stood by me, laid his hand on my shoulder, watched the game. Still didn’t speak. Patted me on the side of the head and left. And one of the newcomers said, “What’s the matter with that son of a bitch.” What the hell’s the matter with him?” The gunnery Sgt., Phillip Judd who called himself, “Old man Judd’s son Phillip” said, “Hold everything! You guys don’t know our Dizzie Walters. Mack was there when he got dizzy and I’m gonna ask Mack to tell ya what made Dizzie Walters dizzy, and after this none of ya ever speak of him in such a way cause he’s one of us. He’s one of ours. He’s a shell shock case but he belongs to us and he belongs to us.” He said, “Alright everybody be quiet. Mack tell um what made Dizzy Walters dizzy.”

We were not in a trench system. We were in a series of rifle pits and automatic pits in front of Torcy. Maybe four and five hundred yards between us and the Germans. Sometimes as many as 40-50 yards between our rifle pits. Our pits were made up of; sometimes one man, usually of two. Then when they had an automatic rifle there was at least three. A “show show” crew. We didn’t have enough men to have an established line. Our line was very thinly held. We were along the edge of the meadow. Just in from the wheat, in this type of pit. It was a quiet summer afternoon. Ray Baldwin from Cleveland was my mate. He was asleep under the parapet of our little rifle pit. In a hollowed out space, catching his rest while I kept the watch. I was lying across the end of the pit. I had my chin resting on my hands peering through the dry brush of the camouflage. The parapet being made up of the dirt we had thrown out of the hole and then this withered brush giving us a screen. To my right about forty feet away were two men, Grandma Edge and Walters. I still cannot tell ya Walters first name. I think it was Harriet. Harry their rifle pit was about 20 or 30 feet from that little stone building just off the Lucy-la-Bocage Torey Road. Walters was on the bottom of their pit catching some sleep, lying face up in the shade. Grandma Edge was laying like myself at the end of the firing pit, his firing pit peering through the camouflage.