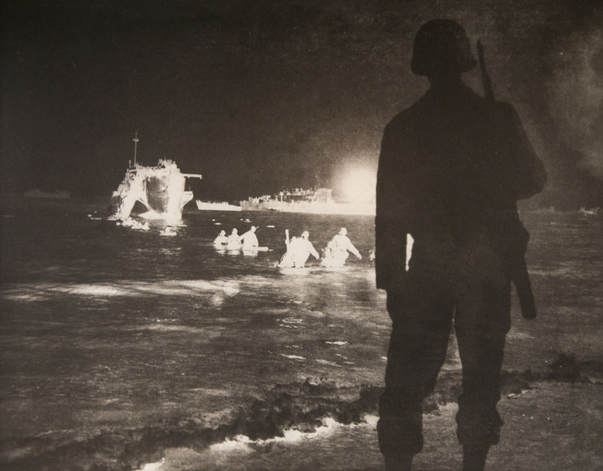 “I Was Nineteen”, 15 ½” x 19 ½”, Intaglio, 2018
​George, Army, World War II
​
That was my first command as platoon sergeant.  I was nineteen years old and it’s burnt in my mind.  January 22, 1944 was the day of the landing.  First time I was platoon sergeant.  You have thirty-six men.  I had four squads of nine men.  I had five new replacements that hadn’t seen combat.  So I’m trying to clue them in.  I said, “This is the landing part”.  I’m in the LST.  “That front end will go down and when that goes down, don’t stand in the middle.  I’ve been through this a couple times before in the boot of Italy”.  Well, two of the guys did.  They were killed right on the barge.  So I only had thirty-four.  So I’ll tell you what I did.  What would Murph do?  I tried to imitate Murph because he was successful at it.  He did the right stage at the right time.  I hollered to the back of the boat.  Three Navy guys on there…operating that barge.  I said, “Pull that ramp up and back up a minute, we’ve got to make some changes here”.  He says, “I can’t do that”.  I turned my gun to him.  I did.  I said, “I’ve got an itchy finger, fella”.  He raised it up and backed up.  I just got to get some things settled here.  I got thirty-four guys left.  I said, “The first and second squad, line up single file on the right gun rail.  And the third and fourth squad do the same thing on the left”.  Murph would never ask anyone to do anything he wouldn’t do himself.  I said, “I’ll go off first with the first and second squad and each one of you guys go off single file and keep about twelve to fifteen feet between you.  When you hit that water, if it’s deep try to keep your head above water and keep your weapon above water”.  Carl Elaine(sp?), he was my squad leader of the third squad.  He was from Baton Rouge, Louisiana.  He was a cut and dry swamp hound.  How he talked…you could cut it with a knife.  I used to ask him, “Where are you from Carl”?  I would do it deliberately just to have him say it.  He was older than me.  He was twenty-three.  He was the squad leader.  So Carl come over and he says, “Jojo, I’ll take the third and fourth off”.  That’s the kind of guys we had.  You loved these guys.  I said I would take the first and second squads off, he wanted to take the third and fourth off.  We got them ashore.  Ten or eleven days later I had nine guys, myself, and aid man and a radioman is all I had left.  I had eight guys killed.  The rest of them were wounded.  Two of those nine were wounded in the leg but they wouldn’t go back.  They wanted to stay there with me.  That’s what it does when you watch a guy lead the right way.  You do the same thing.  They will stay with you.  They stayed with me.  In fact, I was wounded in my left elbow here.  I caught a…it was probably a nine millimeter…grazed me there.  But I was bleeding like a horse anyways.  Major Nozak called and the radioman came up to me and handed me the phone, the radio.  He says, “Did you reach your coordinates sergeant”?  I  said, “Yes we did, sir”.  “Tell me, what’s going on”?  And I told him…”We got about one [inaudible] infantry facing us.  Nope now there’s three coming out of the woods now”.  He says, “Don’t worry.  I got some help on the way”.