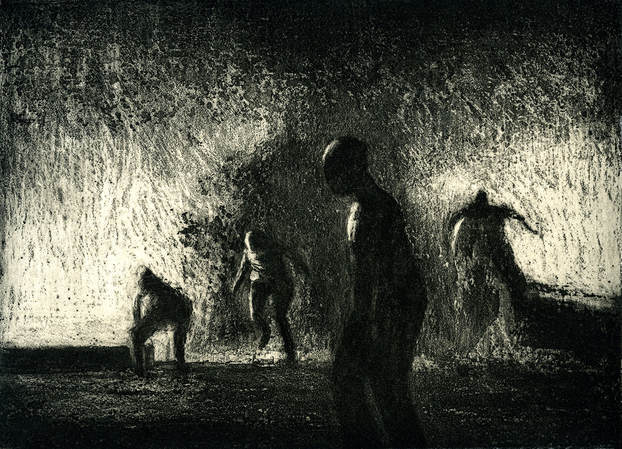 “Untitled”, 9” x 12”, Intaglio, Chine Colle, 2018
Marvin, Army, 1967-1969
​
For three days we couldn’t get any more guns or supplies in.  We were running out of food…running out of water.  At one point the infantry came running back, they captured a few bags of rice and so we opened the rice up and soaked it in water and took a c-ration can and held it over a heat tablet to warm it up that way.  So we would just eat plain rice just to have something to eat.  Water was getting down; we really rationed water for quite a while.  Finally after about three days the weather cleared and the infantry kind of got things settled down and we were able to get the other guns and setup…then they could move out.  While we were in A Shau they uncovered an underground hospital, a Viet Cong hospital out there.  They said it was a very elaborate hospital.  We captured, we didn’t, the infantry, captured trucks, anti-aircraft guns, rifles…they just really uncovered a lot of stuff.  The choppers were still having trouble getting supplies in to us because of being shot at.  So the Air Force would fly C-130s over so we could get supplies and ammunition.  They would fly over top and open their back end up and pallets of ammunition and food and supplies would parachute to us.  You would see a C-130 coming pretty low and you would see him kind of tip his back end down and all of a sudden a bunch of parachutes would come falling out.  Some of them would land close to us…some of them weren’t calculated too good.  That’s where the truck we captured came in handy.  We could take that to go out and pick up our ammunition instead of walking.  We would carry that stuff on our shoulders…I don’t know how many rounds we could get, probably a hundred and some pounds.  Whatever you could get on your shoulders and walk how far to get it back to the gun.