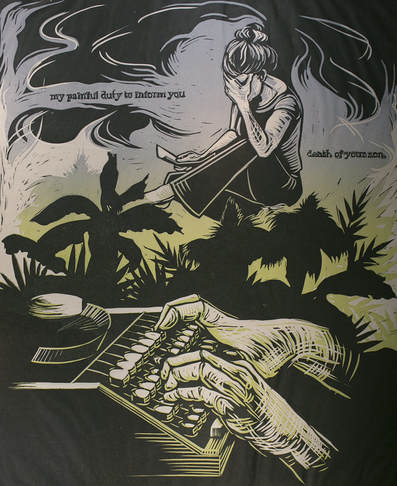 "The Letter Writer", 18 1/2" x 15", Relief
Edgardo, Army, Vietnam
​
The war was really scaling up and I can't tell you how many letters of condolences I had to write because I was the letter writer. You know, "Your son was blah, blah, blah. Dear Mrs." The Colonel would sign off on them, but it was my job to write them. Sometimes I had to make up how they died because I didn't know it all the time. I talked to a lot of guys to tell me exactly what went on, just in case somebody needed a bronze star, you had to write all that stuff. I was the scribe, and the narrator for all that.

I like to think that war is, war's got everything - it's got blood, it's got terror, it's got guts, it's got sadness, it's got a lot of happiness and a lot of laughter and a lot of stupid shit that happens to you. One of the things it brings out is people's survival will. And you meet the craziest characters.