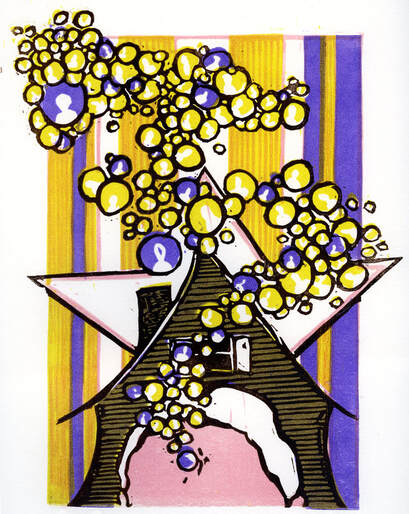 "Welcome Home", 12" x 18", Relief, 2019
Bill, Army, Vietnam​
​
You can't go and face what our troops are facing, what our guys did in Vietnam, what the guys are facing in Iraq and Afghanistan. You can't go through that as a man, and that's what I'm going to talk about because that's what I knew, and not have it change you in some way. I came home in 1970. I didn't think I changed, but I did, and I was angry. I was angry almost all the time.

So where you sought refuge is with other veterans, other guys that have been through what you've been through. But you really didn't talk about that. You just were around other guys that understood. You could say a few words and they understood exactly what you're talking about. Nothing needed to be said. I sought refuge with them, and that helped me get through.
I took it, put it in that closet. I padlocked it and I nailed that damn door shut. But over time, over time it can be something that you see, it can be a smell, maybe a turn of phrase, and that door would come open just crack, and things would spill out.

I just remembered and I processed. I do remember that firefight. I remembered exactly what happened. And I processed it and when I was done, I folded it back up and put it in a box and I put it back in that closet and I closed the door. But the door wouldn't go closed all the way anymore. But I got closed the best I could. And this would happen every six months, six hours, six days, six years. You never knew when that door was going to come over and things would come out. And for me in 2008, the door swung wide open and everything came out. So I sat down and I started to write