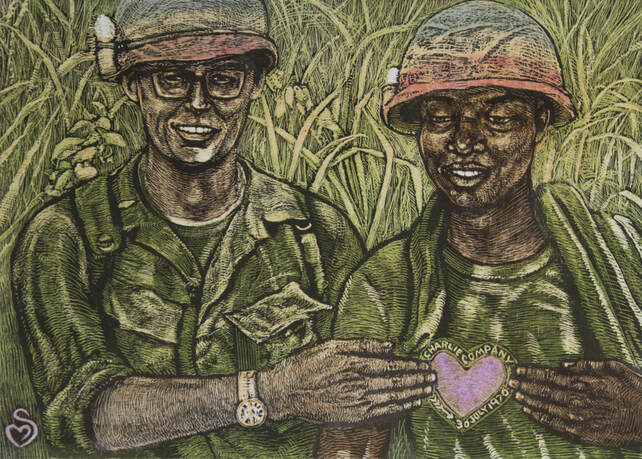 ​“United We Live (E.H. & J.H., Charlie Company 5th/46th. Vietnam, 30 July 1970)
10” x 14”, Relief. 2018
Ernest, Army, 1970-1971
​
They took us out and dropped us off.  We started walking towards the mountain line and walked through a bunch of sand.  We stopped at the top and this other platoon was coming by us to do a perimeter check.  This black guy got within about a foot of me and looked me right dead in the eye and nodded at me.  When he turned around after nodding at me, he turned away from me and I turned to look the other way.  Then we hit a land mine. When we hit the mine he was standing in front of me and it blew his chest up and  knocked me over. When I got up I turned around and looked, and he was lying there pumping blood out. I was able to take my fingers and stick them into the holes and stop him from bleeding until the helicopters could get there.  We lost six that day that got killed and about twenty-eight wounded. I never knew the guy’s name. The only thing I knew was that he was a black guy. So I threw him on the helicopter with a few other guys that helped me and away he went.  That was July 30, 1970. That was my first contact and I had only been in country since July 9. I only had twenty-two hours in the bush.

In 1999, in St. Louis, MO, I went to a reunion.  This black guy came up, pointing out another man and said “That’s Jesse Hill.”  I had no idea who Jesse Hill was. He said, “He’s the guy that was in that land mine incident.”  I said, “No, he died.” I went up to Jesse and he said, “I don’t know you.” I replied, “I don’t know you either.  The only way I would know you is if you had a bunch of holes in your chest.” He looked at me and unbuttoned his shirt and pulled his t-shirt up.  I put my fingers back in those holes. He had lived. But for twenty-nine years I thought he had died. Stuff like that gets burned into your mind and it just doesn’t go away.  I really can’t explain how it feels to know something like that after all those years.